The diaries and genealogical data of Randal William McGavock, Mayor of Nashville (1858-1859,) and Colonel in the Confederate Army (1861-1863), were placed in the Tennessee State Library and Archives by Miss Margaret Warden and Dr. Herschel Gower. Also included were the pictures collected by Dr. Gower, some of which were used in the book, Pen and Sword.

The materials in this finding aid measure 1.2 linear feet. There are no restrictions on the materials.

Single photocopies of unpublished writings in the Randal William McGavock Papers may be made for purposes of scholarly research.

This collection is composed of the eight small diaries of Randal William McGavock for the years 1848-1862 and about 200 items of genealogical material. The diaries deal with the period while Randal was attending Harvard Law School; his twenty-month tour of Europe, Asia, and Africa; his marriage to Seraphine Deery; the period while he was Mayor of Nashville; and his Confederate service until October 1862. They contain much interesting and valuable information about the turbulent period of the 1850s, written by a well-educated and very observant man. They have been edited by Herschel Gower and Jack Allen and published in Pen and Sword, a Tennessee Historical Commission publication.

The two-hundred genealogical items deal with the McGavock family in Ireland, Virginia, and Tennessee. Some items deal with the family of Randal’s wife, Seraphine Deery. This material was collected by Dr. Herschel Gower in the preparation of his biographical sketch of Randal McGavock for the book, Pen and Sword.

In addition to the above-named items, thirteen documents of the McGavock family have been added to the collection. They are composed of deeds and indentures for the years 1854-1898 and the will of Francis H. McGavock, dated 1864.

Photocopies of about fifty items of McGavock papers were added to the collection by Mr. Jacob McGavock of Wytheville, Virginia. These include letters of David, James, Joseph, Randal, and Robert, as well as several sisters and sisters-in-law of the McGavock family. The letters were written from Franklin and Nashville, where the McGavocks had settled, to their father, Hugh, and other relatives in Wytheville, Virginia. They contain information about schools, buildings, wars (1812 and Mexican), politics, and happenings around Nashville and Franklin during the early 1800s. There are a few documents dealing with land cases, a will of Mary Kent, and some clippings, which make up the remainder of the papers. 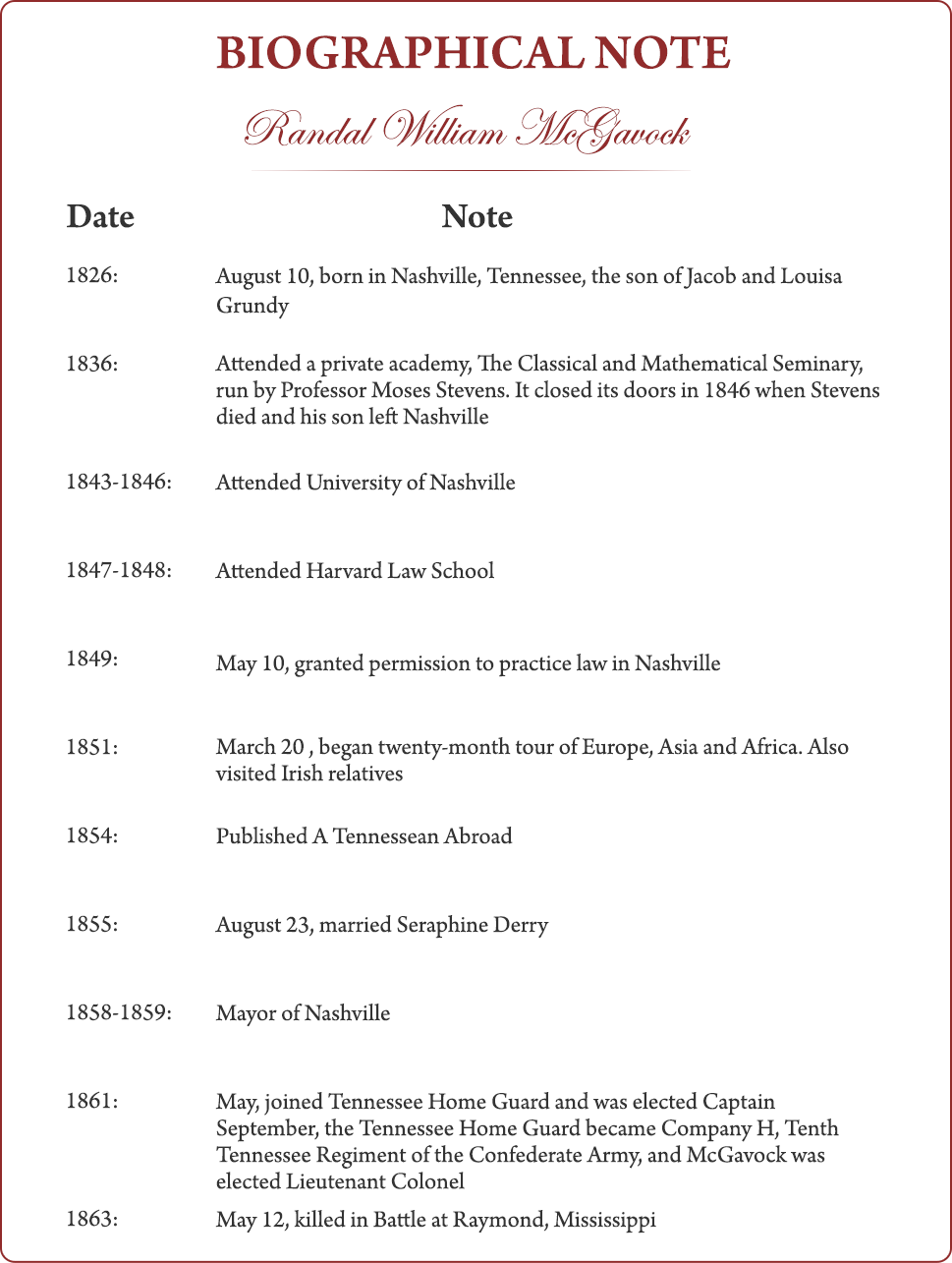