James Cloyd (b. 1680 in Ireland of Scottish ancestry; d. 1769 in Chester County, PA.), iS presently the topmost person in my family tree. It is not known just when he came to America. but at least one of his sons preceded him. David Cloyd (b.1710 in Ireland; d. 1792) is said to have arrived about 1730. Both he, and later his father, entered this country in the Chester County, PA area.

David ultimately migrated to the Shenandoah Valley of Virginia, his last home bilinear Amsterdam in Botetourt County. David s son. Michael (b. about 1735; d. 1805) was co­ founder of Amsterdam and built a two story log home there on the east side of the present high­ way between Roanoke and Fincastle. That home was “discovered” in 1995, having been covered by more modern siding. The home was disassembled, transported northward to a spot two miles south of Fincastle; and reassembled where it presently (1999) houses a gift shop.

Michael Cloyd married Elizabeth Neally and had nine children, of whom John Cloyd (b.about 1770 in Virginia) was my ancestor. The family, in the next generations or so,started the migration westward through the mountains, then spread northward to Ohio; south to Tennessee and Alabama and westward into Illinois and Missouri.

Michael’s son John and his wife, Mary WI throw, and family settled in Lincoln County,Kentucky. They had seven children, of whom Joseph, (b. March 10, 1794 in Vu:giniamar­ ried Nancy Jane Wright. They had ten children, of whom their son, John (b.November 14,1823 in Lincoln County, Kentucky;d.March 4, 1910 in Mercer County, Kentucky.) married Jane Bot­ toms. That couple had nine children, the young­ est being James Ellis Cloyd, my grandfather.Of the seven children of James Ellis and Jane Bottoms Cloyd, the three oldest sons and the lone daughter remained inthe Mercer-Washing­ ton Counties area of Kentucky. The three
younger sons migrated to central Illin?is. Grandchildren and great grandchildren of James Ellis Cloyd have scattered as leaves in the wind to areas as diverse as Washington state, Washington, D.C., Texas, Florida, arid Ohio, to name a few.

The Cloyd (or Clyde) family was from Scotland. Known as Scotch-Irish, they were among the immigrants who went to Northern Ireland in the 17th Century, and came out to America from Ulster, the northernmost province of Ire­land. James Cloyd I, Scotchman, was born in Ireland in 1680. He brought his family to America where he died in 1769.

In 1764 a party of Indians raided the House of David Cloyd near Amsterdam in Botetourt County,killing his wife, Margaret and son,John. An account of this massacre is given in Waddel’s “Annals of Augusta County”, written in 1843 by Mrs. Letitia Floyd, wife of Gov. Floyd and Daughter of Col. William Preston. “One day in March 1764 when Col. William Preston had gone to Staunton, Mrs. Preston early in the morning heard two gun shots in quick succes­ sion in the direction of David Cloyd’s house half a mile distant. Presently, Joseph Cloyd rode up on a plow horse and related that the Indians had killed his brother John, had shot at him (the powder burning his shirt) and having gone to the house had probably killed his mother. Mrs. Preston immediately sent a young man to notify the garrison of a small fort on Craig’s Creek and then dispatched a white man and two Negroes to Mr. Cloyd’s. They found Mrs. Cloyd tomahawked in three places but still alive and conscious.She told of the assault by the Indians, of their getting drunk, ripping up the feather beds and carrying off the money. They were pursued by a party of militia including the Cloyd’s son, Michael and his two Neeley brothers-in-law. One of the Indians was killed near 1ohn’s creek, thirtymiles or more from the scene of the massacre and robbery. One hundred and thirty-seven pounds were found on the body of the dead Indian. A disputed ten pence was returned to Cloyd. Each militia man was paid five pounds. Part of the stolen silver was also recovered.”

Michael’s family lived in a two-story log dwelling house in Amsterdam with shingled roof and clay chimney. This structure was identified, dis­ mantled and beautifully restored along Rt. 220 three miles south of Fincastle in 1996. It is open to the public as a gift shop, Cabin Creek. 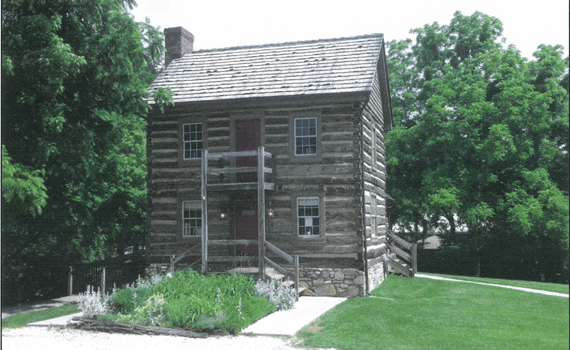 Community Building on the Roanoke

July 18, 1794 – Road established from James Dalzell’s to intersect with the Creely’s Gap Road.

1796 – Presented, Surveyor from the Fork at Stover’s Town to Howry’s. 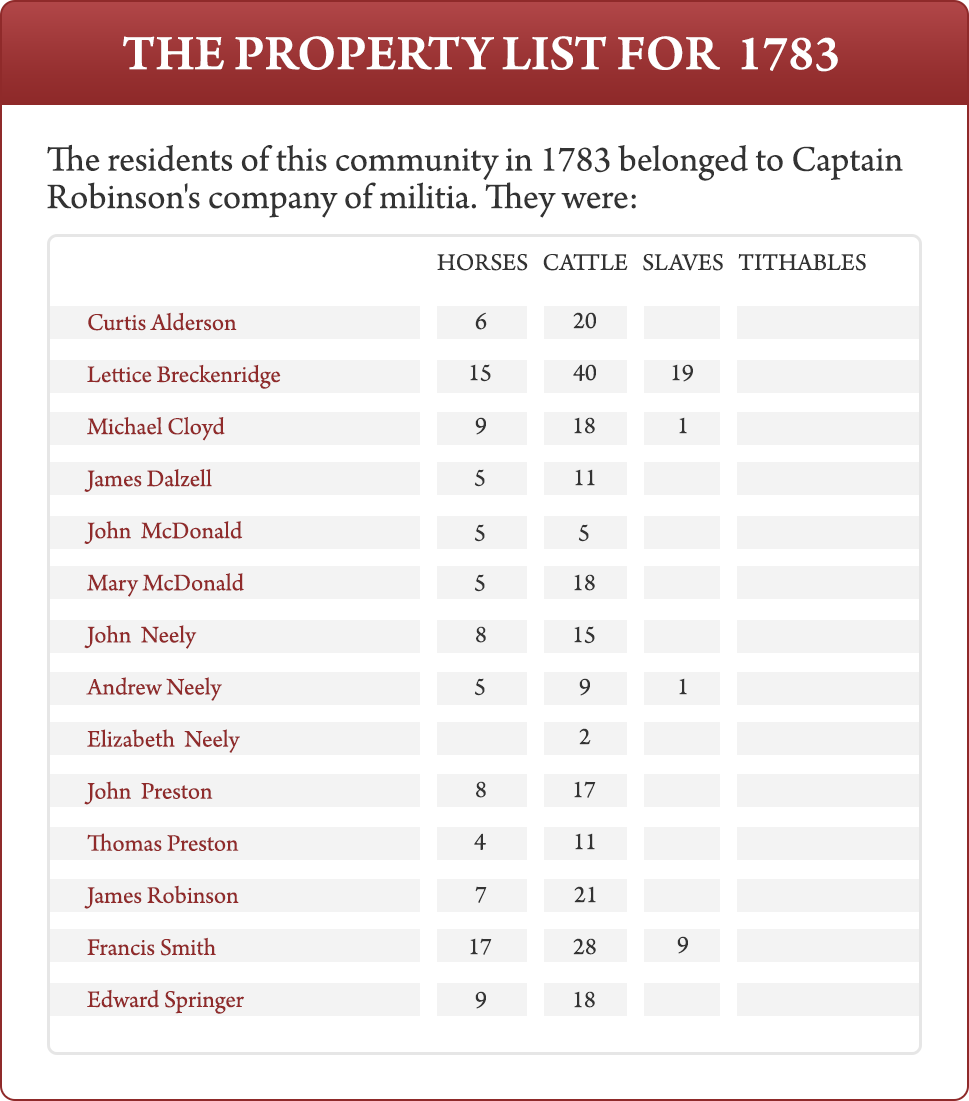 Although David Cloyd and his son, Joseph, were still owners and proprietors of the old Cloyd place at the head of Rentfroe’s Branch, they are not listed in the militia of Botetourt County. Joseph Cloyd married Mary Gordon, daughter of’ Thomas Gordon, in 1765, the year after his father’s home was raided by the Indians and his mother killed. Apparently Joseph’s home was at his father’s old place. Until he moved to Back Creek of New River sometime between 1772 and 1774. In 1780 David made added to Joseph for the Botetourt land and in 1790 made his will and died. Joseph was in possession of the land yet in 1797 when he sold the plantation to John with row and David Shanks, reserving one-hash acre where the graveyard “now stands.” This would indicate that the deceased members of the family were buried there on the place. There yet an old graveyard at the head of the draft west of the house. The rows entered other land west of the graveyard and subdivided the place into pieces vecy odd in shape. In 1799 they sold the major part including the Cloyd homeplace to Edward Mitchell who built there a substantial rock house a11 bank barn which are still in use.

For a hundred years and more this has been known locally as the Fire­ baugh Place. It now off the main road and somewhat inaccessible, the history of the community it occupies a prominent place. Near the highway on what was one the Withrow divisions of the original Cloyd land there is an old house known as the Gish Rouse, now Ruff’s.

The Cloyd gravestones in the cemetery the High Bridge Church in Rockbridge county tell us that David Cloyd, Sr. of Rockbridge, died August 16,1789 in the 51st year of his age.

Elizabeth Cloyd died November, 1796, aged about 50 years. David Cloyd, Jr. died 1804, aged about 36 years. Andrew Cloyd died 1798, aged about 26 years. Michale Cloyd owned land first on Persimmon Run of Catawba.He appears in the Buffalo Creek community as early as 1770. In 1783 he had nine horses and eighteen cattle and lived on the Great· Road where Joseph McDonald first lived, east of present Amsterdam. His will made March 22, 1807 is interesting. His eldest son, James, was to have £100 and bed and clothing; second son, David, 1 shilling; third son, John £30; fifth son~ Samuel, £30; sixth son, Joseph £30 and what land his father possessed with its appurtenances including Cloyd’s Street in Amsterdam, by paying the seventh son, Jesse, £200 including what had been paid; only daughter3 Elizabeth Law, £~60 and the new end of the house where the family then lived and free liberty of the kitchen and spring house and also the use of the negroes, Isom and Kate.

The lots in the Town of Amsterdam in Roanoke Street were to be divided amongst all the children, except Joseph-James to have first choice and the rest divided amongst the other children. Other property was to be sold and the money divided. The executors were James Cloyd and Joseph Cloyd.(Bot. Will Bk.13, 140.). The family of Joseph Cloyd moved to Alabama.