Descendants of David Cloyd,Immigrant No. 3

David Cloyd, supposed to have been the son of James, 1, of Chester County, Pa.,m. Margaret Campbell. The first legal record of his residence in America is found in the purchase of a tract of land in New Castle County, Pa., now a part of Delaware, from Letitia Aubrey, a daughter of Wm. Penn, which he and his wife Margaret sold in 1733. It is not known where he lived for the next twelve years, but one report has it that he moved to Ver­ mont where he lived for some time. This same tradition also states that there were 3 immigrant brothers who landed in New England. That he had brothers in America who did not live in Virgina is shown by the fact that one of his sons at a later date visited his cousins in the north. It is probable that he remained in Delaware in accordance with a more authentic tradition as he sold his New Castle County home in 1749.

In 1745 he bought 400 acres from John Buchannan in Orange County, Va.in what was afterwards set off to form Augusta County, and later in 1770 to form Montgomery and in 1776 to form Rockbridge County.

It is not known when he came to America, nor when he married. One report states that he married in New Jersey and another that his oldest son, James, was born in Ireland.

The following facts gleaned from “Green’s Historic Families of Kentucky” bear closely on the time of his coming and the ancestry of his wife :

The Journal of Charles Clinton, the founder of the historic family of that name in New York gives an account of some of the families that sailed from Ireland on the “George and Ann” and the “John of Dublin” on May 9th,1729, and landed in Pennsylvania, Sept. 4th, 1729.In the company were McDowells, Campbells and many other families which settled first in Pennsylvania and later in Virginia.

Of this number,Ephraim McDowell and his sons, John and James, arranged in the Spring of 1737 to settle on the famous “Beverly Manor” tract in Augusta County, Va. when they met with Benjamin Borden, the holder of the famous “Borden Grant”.

Borden was required by the conditions of his grant to locate not less than 100 families on his land and he made the McDowells a tempting offer which they accepted. Complying with their agreement with Borden, they immediately entered into communication with their kindred, friends and co:religionists in Pennsylvania, Ireland and Scotland, soon drawing around them other Seotch and Scotch-Irish families among whom were the Cloyds and Campbells.

John McDowell married Magdelena Wood,whose mother was a Campbell, and, as tradition has it, of the noble family of Argyle. Mary, daughter of Ephraim married James Greenlee and James McDowell married Mary Greenlee, said to have been remotely descended from the Argyle Campbells.

In 1764 a party of Indians raided the house of David Cloyd near Amsterdam in Botetourt County, killing his wife, Margaret Cloyd, and son, John. An account of this massacre is given in Waddel’s “Annals of Augusta County,” written in 1843 by Mrs DOUGLAS CAMPBELL, of Cherry Valley, N. Y., born Cooperstown, N. Y. July 13th, 1840, married Harriet Bowers Paige,Dee. 5th, 1865, had children; William Auchinbreeht, Harriet Mumford, Maria Starkweather and Douglas. He was a distinguished lawyer and served as a Major in the Union Army.

Son of JAMES S. CAMPBELL of Cherry Valley, who was born in Cherry Valley, Nov. 9th, 1172, and died there March 23rd, 1870. When six years old he was taken and kept a prisoner by the Indians for two years. He was a farmer and County Judge. Married Sally Elderkin, Dec 1st, 1800, and had seven sons.

Son of SAMUEL CAMPBELL of Cherry Valley, who was born in Londonderry, N. H.Apr. 25th, 1738, and died in Cherry Valley, Sept.12th, 1824. He served with some distinction in the Revolutionary War, married Jane Cannon, a native of Ireland in 1768.

“One day in March 1764 when CoL Wm. Preston had gone to Staunton,Mrs. Preston early in the morning heard two gun shots in quick suecession in the direction of DaYid Cloyd’s house half a mile distant. Presently Joseph Cloyd rode up on a plow horse and related that the Indians had killed his brother .John, had shot at him (the powder burning his shirt) and having gone to the house had probably killed his mother. Mrs. Preston immediately sent a young man to notify the garrison of a small fort on Craig’s Creek and then dispatched a white man and two negroes to Mr. Cloyd’s. They found Mrs. Cloyd tomahawked in three places but still alive, and conscious. She told of the assault by the Indians, of their getting drunk, ripping up the feather beds and carrying off the money. One of the Indians wiped the blood from her temples with a corn cob saying ‘Poor old woman, She died the next. morning.”

The papers in a suit in Augmsta County in 1766 some light on the Indian invasion and the robbery of David Clyod’s house. The Indians carried away over 200 pounds English Money. They were pursued by a party of militia, one of them killed on John ‘s Creek, 30 miles or more from the scene of the massacre and robbery. One hundred and thirty seven pounds. Londonderry, N. H., and afterwards to Cherry Valley, N. Y. 1741 married Sarah Simpson.

Son of WILLIAM of Cambelltown, Argylshire and Londonderry, Ireland, where he lived and died. He was a Colonel in the siege of Londonderry and was descended from the Campbells of the House of
Auchinbrecht (Hugheg’s American Ancestry, VoL 8, pp. 156-7.)

The Campbells were among the early settlers of Rockbridge County,Va.

Martha Orchard Malatt, Bloomington, III, gives in Walker’s Genealogy an account of nine children of John and Elizabeth Campbell, three of whom came to America, settled in Pennsylvania and later, about 1744, near Staunton, Virginia.

There was a Margaret Campbell who was a resident of Middletown, Monmouth Co., New Jersey in 1716. She owed a Merchant ,John Browne an account at his death.

Col. William Campbel1 the hero of the battle of Kings Mountain Oct. 7th 1780, was a native of Augusta County, and moved at an early day to Washington County, Va. The sword used by him at the battle of Kings Mountain is now (1860) in the possession of his grandson, Wm. Campbell Preston of South Carolina. It is now more than two centuries old and was wielded by the ancestors of Col. Campbell in Scotland in the wars of the Pretenders.

were found on the body of the dead Indian. A dispute arose among the militia as to whether the money belonged to them or to Cloyd. The money was finally distributed among them, all of whom except one James Montgomery returned their share to David Cloyd who thereupon paid each of the men five pounds, the reward he had offered, and sued Montgomery for the balance, thirty one pounds and ten pence. The suit was decided in Cloyd’s favor but Montgomery took an the General Court and the final result is not known.

A negro woman named “Dolly” survived the Massaere at Amsterdam and lived to an old age. Many have been the stories handed down about this old negro, her scalped head and indented skull. The “History of Southwest Virginian hy Thomas Bruce, published in 1891 gives an incorrect account of the massacre, Stating that the woman killed was a widow. John who was killed then was married and reference is probably made to his widow.

WILL OF DAVID CLOYD

A leather pocket book owned by David Cloyd and brought by him from Ireland was in the possession of the family of Mrs. Sophia Cloyd Swihart of Pueblo County, Ohio, in 1898. 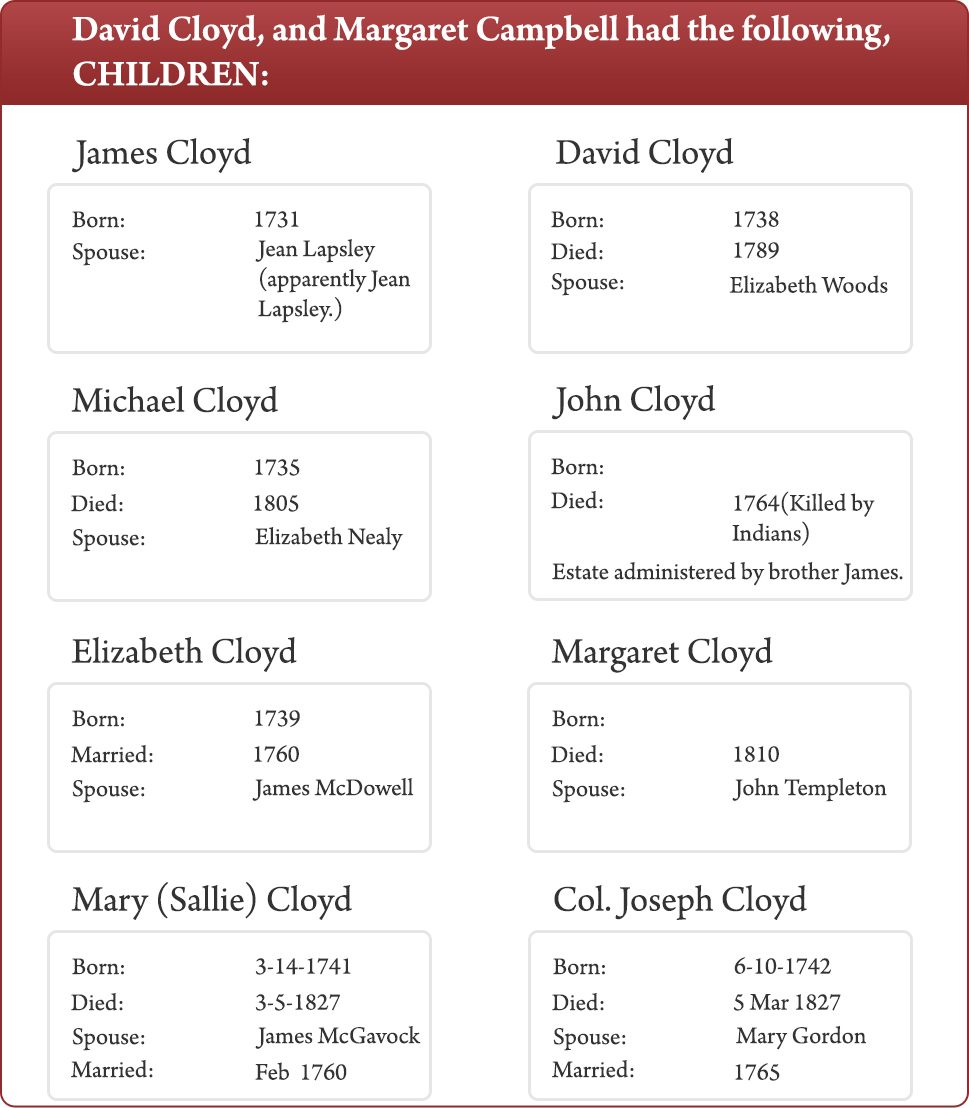