Shields, Jartan & Coat of Arms associated with the
Campbell Family 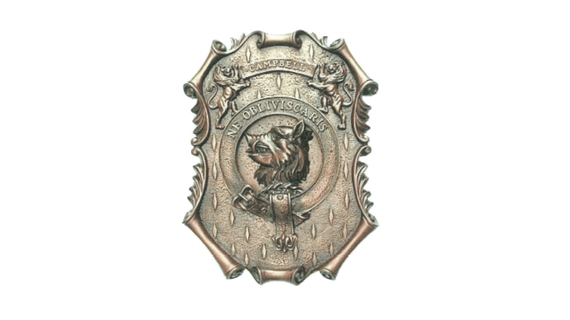 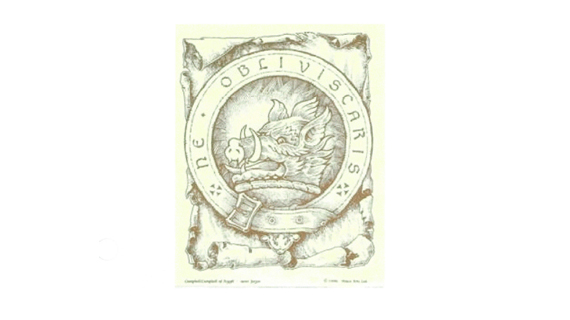 Governor David Campbell (1.779-1.859) of Virginia was a conscientious historian and it is mainly due to his work that the story of John Campbell and Grace (Grissell) Hay (parents of White David) and their descendants has survived. Governor Campbell’s papers and other documents are part of the Campbell Papers Collection (about 8,ooo documents) located at Duke University, Durham NC. A microfilm copy of the Campbell Papers is located at the Tennessee State Library and Archives in Nashville. In 1.996, while reviewing this microfilm copy, I found the following note, in Governor David Campbell’s handwriting, on microfilm reel number 1. (my, Phil Noifleets, comments are in brackets)

“The farthest back the Campbell family can be traced is to Duncan Campbell of lnverary, Scotland, the place where the old Duke of Argyle and most ofthe Scotch [sic] Campbells lived. It was in the latter part of Queen Elizabeth’s reign that Duncan Campbell moved from lnverary to Ireland. Not long afterwards, in the reign of James First, when he had come to the throne, forfeitures were declared at Ulster in 1612, and Duncan Campbell bought a lease of the forfeited land from one of the English officers. One of his sons, Patrick, bought out the lease and estate in remainder, whereby he acquired the [land in] fee simple. How many other sons Duncan may have had is not known.

“Patrick had a son Hugh, and he a son Andrew. The generations from Andrew to our great-grandfather John [husband of Grace Hay] are not stated. It should be to Duncan, father of John Campbell, [who] emigrated to America with his family in the year 1726 and settled in the Sweet Ara river where Lancaster now stands in Pennsylvania. He [meaning John Campbell, husband of Grace Hay] had six sons, Patrick, John, William, James, Robert and David. Three- to wit- John, William and James were never married. John died in in England having gone there with Lord Boyne and became [his] steward.”

Governor David Campbell (1.779-1.859), in a letter to Lyman Draper, dated 12th Dec 1840, spoke of the origins of his branch (White David’s) of the Campbell Clan in America. An extract from this letter [see Draper
Manuscripts, Kings Mountain Papers, 10DD6, pages 1. and 2] is presented below. My (Phil Noifleets) comments are given in brackets.

“…The Campbell family from which I am descended were originally from lnverary in the Highlands of Scotland came to Ireland in the latter part of the reign of Queen Elizabeth & thence to America. John Campbell[husband of Grace Hay] my great grandfather and the great grandfather of Gen’l William Campbell of the Revolution came from Ireland with a family of ten or twelve children, leaving behind him only one son, and settled near Lancaster in Pennsylvania in the year 1726. His eldest son Patrick was the grandfather of Gen’l William Campbell. His youngest son David [White David] was the father of Col Arthur Campbell and my grandfather. So that Gen’l Campbell and myself were second cousins. The family remained in Pennsylvania but a few years and then removed to the frontiers of Virginia, in that part which afterwards formed the county of Augusta. Here they lived many years. John Campbell (my father) the eldest son of David and Col Arthur Campbell the second son were born, raised and educated in this county. Gen’l William Campbell was also born, raised and educated here …. ”

From my own research, I can place these Campbells in Beverley Manor by 1738 in that year Patrick Campbell acquired 1.546 acres of land in the Manor. John Campbell (husband of Grace Hay) died in about 1741 as his
estate was appraised/inventoried in that year. In summary, based on my own research among the records of Orange and Augusta Counties VA, Governor David Campbell’s story of the origins of his family in America appear to be entirely reasonable.

E-MAIL MESSAGE OF DIARMID CAMPBELL RE ANCESTORS OF JOHN CAMPBELL

” … although a number of people have attempted research in Ireland absolutely no further information has appeared about the ancestry of Duncan Campbell who married Mary McCoy.

“Pilcher states quite clearly at one point in her book that her information on those earlier (likely fictitious generations going back to lnverary) were taken by her from an elderly relation who thought she
remembered that information. Pilcher had not intended to publish her book and it might have been better had she not, since the misinformation has misled so many and God knows how many family histories have now been published giving her bogus material as their source. Her later material appears to be more sound, although since she often gives no sources or references (as to where material was found), it means that anyone of the descents of those whom she outlines has to re-do the research.

“I have also thought that there might be some connection between the Drumaboden and the 18th century Virginia Campbells. But none has as yet appeared. Two professional research efforts in Ireland have so far been conducted, one just completed and the other in the ‘8os. These were conducted by getting a group of descendants to put up some funds each and were co-ordinated through the Genealogists of the Clan Campbell Society of the time. While both were helpful in clarifying where no information could be found (so making easier any future research efforts), neither produced any clarification on the ancestry of either family going back from Ireland to Scotland.

“If you want the results of the second research effort you could write to the Society Genealogist, Dr. Ruby G. Campbell PhD, 3310 Fairway Drive, Baton Rouge LA 70809 USA, and ask her to let you know what to send her for the photocopying and mailing costs. But the information is not, I seem to remember, directly concerned with Drumaboden” There are in fact three sets of Northern Irish Campbells who may or may not be connected Drumaboden, Duncan and his cousin Dugald Campbell, and the 18th century Virginia Campbells ( descended from one John Campbell who came over to Pennsylvania at a fairly advanced age in the 1720s or 30s.”

” John Campbell, son of Duncan Campbell and Mary McCoy, his wife, married Grissell (or Grace) Hay, daughter of Patrick Hay, in the year 1695. She lived to be ninety-three years of age …. John Campbell and his wife, Grissell Hay, with their children, moved from Lancaster County, Pennsylvania about 1730, to Fincastle County, Virginia”

The last statement of the above quotation is in error. While Lancaster County PA was formed in 1729, Fincastle County VA was not formed until 1772. The land records of Orange County VA indicate that John Campbell, and at least three of his sons (Patrick, Robert and David), had removed to Beverley Manor by 1738 or perhaps a year or two earlier. Upon the full activation of the Augusta County VA Courthouse in December 1745, the subsequent records pertaining to these Campbell inhabitants of Beverley Manor are found in Augusta County.)

The name “Grace” comes from the Latin and means “graceful” or “lovely.” In French the name is rendered as “Grazielle.” In Scotland the name is frequently rendered as “Grissell,” a variation on the French pronunciation and spelling.

In my research among the 18th century records of Orange and Augusta County VA, I have never seen the name “Grace (or Grissell) Campbell” or “Grace Hay” appear. Accordingly, I am unable to provide any documentary verification as to Grace Hay’s existence as the wife of John Campbell (d. 1741).